In 1989 the International Committee for the Publication of the Carlsberg Papyri (ICPCP) was established. Its purpose was to advance the study and publication of the Carlsberg Papyri that had been donated to the University of Copenhagen in 1939, but which had remained large unpublished. With the notable exception of the papyrologist Adam Bülow-Jacobsen, who had published a series of Greek texts, no Danish scholar had worked on the collection since the death of Aksel Volten and Wolja Erichsen in the 1960's. Since the Committee was set up matters proceeded rapidly. It was decided that the bulk of the texts from the collection should be published in a series to be entitled The Carlsberg Papyri and the first volume appeared already in 1991.
The original ten-year project was directed by Prof. Paul John Frandsen and came to a successful conclusion in 1999. It is a pleasure here to  acknowledge the collaboration of the members who served on the Committee: Prof. Francoise de Cenival (Paris), Prof. Paul John Frandsen (Copenhagen), Prof. Janes H. Johnson (Chicago), Prof. Mark Smith (Oxford), Prof. W. John Tait (London) and Prof. Karl-Th. Zauzich (Würzburg).
Since 1999 the Papyrus Carlsberg Project has been directed by Kim Ryholt and several hundred additional texts have been inventoried. A large-scale publication programme is in progress, focussing above all on the important material from the Tebtunis temple library. The current project involves both international experts and students of the department.

Research on the Carlsberg Papyri, both past and present, has been made possible with generous grants by the Carlsberg Foundation. 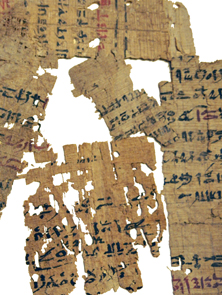