The collection includes several Demotic letters from the Ptolemaic period. One of these, Papyrus Carlsberg 21, is interesting from a literary point of view in that it mentions the loan of two books. The letter is written in an apologetic tone, apparently because the return of the books is overdue. It is from Tebtunis and dates to the second or first century BC.

Translation:
'Miysis son of Haryothes greets Phanesis son of Onnophris, the prophet of Thoth.
I never cease to ask anyone whom I can find about your well-being, and they tell me "no harm has befallen the prophet of Thoth until today".
I have caused Horos son of Marres, my brother, to bring you the medical book and the jar book, a total of two books, which you gave to me before this day.
Don't cause a rebuke because of the delay which has happened. I would not have found anyone trustworthy ... [the rest of the letter is lost]'

As it is customary, the address is written on the reverse. It reads: 'To be given to Phanesis son of Onnophris'. 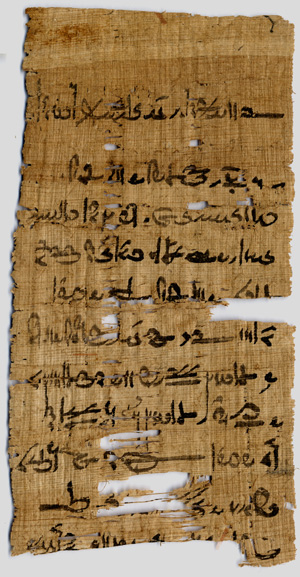